Muslim wood carvers from Persia, Syria, Egypt and Spain are known for their skills. They have designed and executed the richest cladding and other decorations for wall coverings, ceilings, pulpits and all types of furnishings and furniture. [Who?] The Mosques The private houses of Cairo, Damascus and other oriental cities are full of the most artistic and finest woodwork. A popular style of ornament was to cover the surface with very intricate interlacing patterns that consist of finely shaped ribs. The various geometrical spaces between the ribs were then filled with small pieces of wood carved in a slight relief with leaves. The use of different woods such as ebony or boxes, which are inlaid to emphasize the design, combined with the ingenious richness of the patterns, give this class of wood an almost incomparable effect. Carved ivory is also often used to fill the rooms. The Arabs are masters of the art of carving flat surfaces in this way. A gate in the mosque of the Sultan Bargoug (Cairo, 14th century) illustrates this appreciation of lines and surfaces. The pulpit or mimbar (15th century) from a Cairo mosque that is now in the Victoria and Albert Museum is also a good example in the same style. In this case, the small rooms are filled with ivory, which is carved into a flat relief.

Labyrinth screens of complicated carpentry, consisting of a multitude of tiny balusters that connect hexagons, squares or other shapes and whose flat surfaces are constantly enriched with small carvings, are known to everyone. In Cairo, we also have examples in the Qous Mosque (12th century) for this finely arranged geometric interweaving of curves with leaf ends that characterize the Saracen designer. Six panels in the Victoria and Albert Museum (13th century) and works on the tomb of Sultan Li Ghoury (16th century) show how deeply this form of decoration was rooted in Arab nature. Figure work and animals were sometimes introduced in the Middle Ages, such as in the six panels just mentioned and in the Hospital du Moristan (13th century) and in the mosque of El Nesfy Qeycoun (14th century). On the door of Beyt-el-Emyr there is a magnificent table. This exquisite design consists of vine leaves and grapes of conventional treatment in bas-relief. The Arabian designer liked to break open his disguise to commemorate a similar Jacobin custom. The main panel would be divided into a number of hexagonal, triangular, or other shapes, and each small space would be filled with traditional scrolls. Much of this simple flat design is reminiscent of the Byzantine method that inspired the Elizabethan carvers. 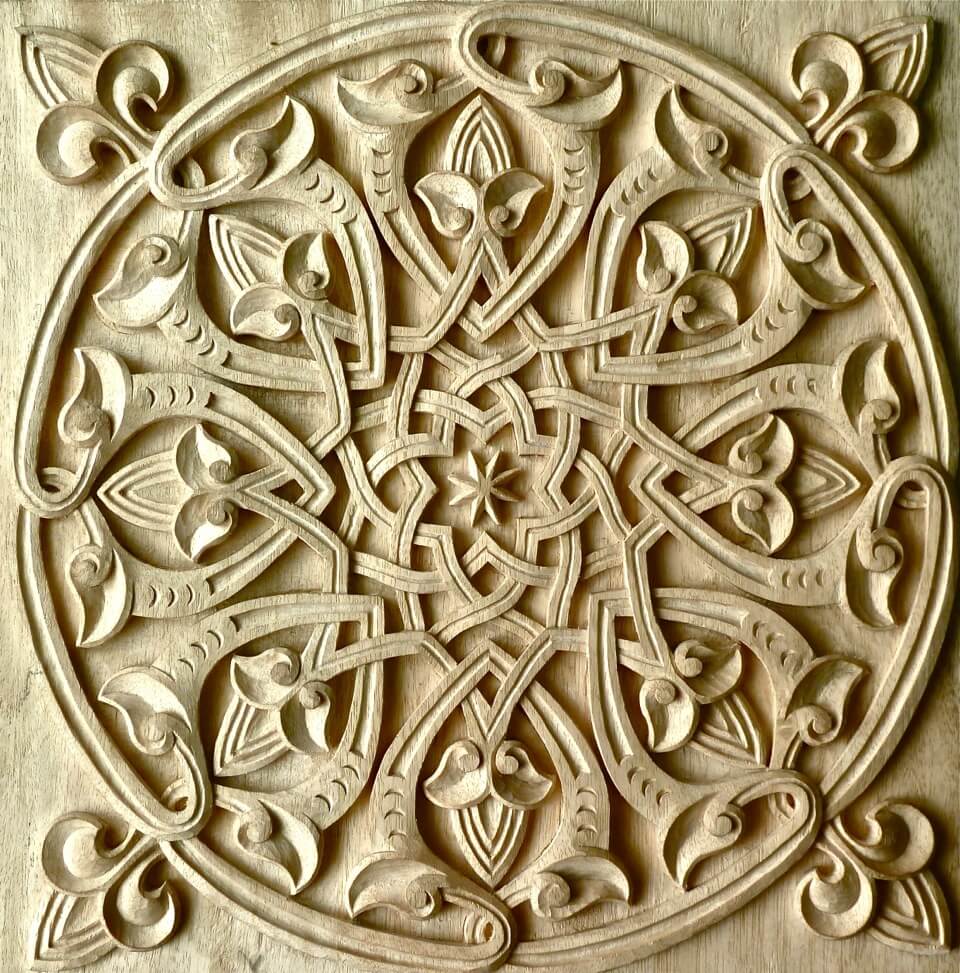 The Persian carvers followed the Arabic design exactly. Two doors from the 14th century from Samarkand (Victoria and Albert Museum) are typical. Boxes, spoons, and other small items were often littered with Saracen-style interlacing lines, and the tenderness and accuracy of the work required extreme patience and skill. Many of the patterns are reminiscent of Madras’ sandalwood work, with the difference that the Persians were satisfied with a much lower relief. Sometimes a very nice result was achieved by making the leaf lattice pattern between the leaves economical. A beautiful 14th century plaque in the Victoria and Albert Museum shows how active the Arab influence was until Bokhara.